Computational Flâneur is a site-specific generative poetry walk built for San Francisco's Fort Mason. It is available as a free download on the iOS App Store. 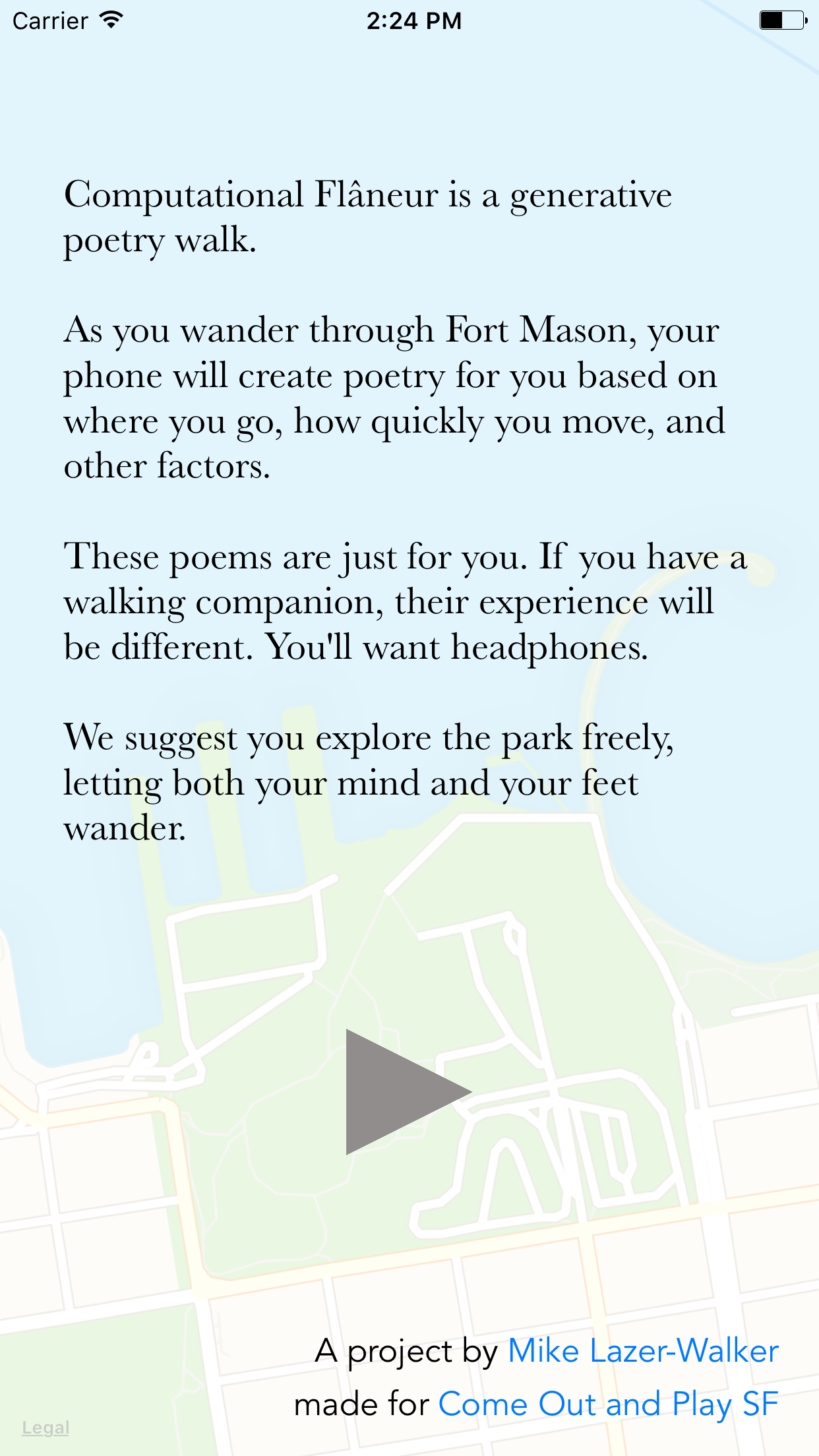 As you wander through Fort Mason, your phone creates and reads you poetry based on where you are in the park. Walk by the waterfront, for example, and you'll hear poems of the sea; walk by the cannons and you'll hear war poems.

Inspired by the 19th century urban act of flânerie, the app aims to provide a meditative experience akin to doodling. The poetry it generates is not so interesting as to fully command your attention, but it is interesting enough to pull yourself out of your thoughts and instead focus you on your surroundings.

On a technical level, the project divides up Fort Mason park into a number of geofence regions (generated manually using a custom-built phone app). When you are within a given region, it randomly selects one of a number of hand-written prompts written to match the feeling of that region of the park and consults a lookup table consisting of hundreds of thousands of poetry snippets pre-generated by a char-rnn ML model trained on 20th century poetry (at the time this project was produced, sampling large language models on a smartphone was not viable).

The "temperature" of the sampling was affected by your walking pace, so people moving quickly would get a more variant experience with potentially more interesting (if nonsense) poems, while people walking at a slower, more ponderous pace would get a more consistent and meditative experience.

Additionally, a few specific regions contain additional ambient background soundscapes, balanced so that it's difficult to tell what's being produced by the app versus what's really in the park. For example, in the big main park area, you may hear children playing, and in the community garden you'll hear birds chirping.

On a design level, this was a project that required intense in-person playtesting and iteration. Earlier versions of the project took more exhaustive advantage of smartphone data sensors, modifying poetry based on factors such as the current weather. Ultimately, these inputs were too opaque to players; the simple combination of hand-tuned region and walking speed seemed to create the correct balance of enabling serendipitous synchronity with the real world.

Computational Flâneur was built for the 2016 Come out and Play SF festival.If you'd like to know more about the piece, I wrote a chapter on procedural generation in real-world spaces using Computational Flâneur as a case study for the Procedural Storytelling in Game Design textbook, ed. Tanya X. Short and Tarn Adams. The source code can be found on GitHub.